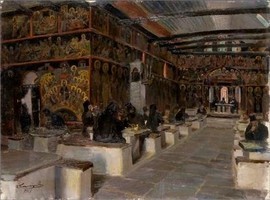 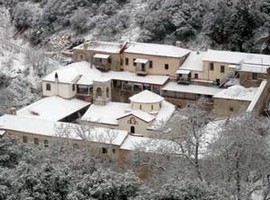 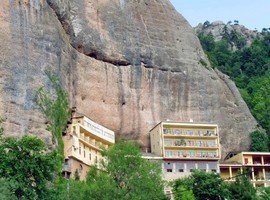 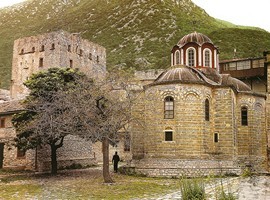 The Holy Monastery of Agia Lavra is located 5 kilometers southwest of the town of Kalavrita.

Upon delivery and data available, the history of the monastery begins during the times of the Byzantine Emperor Nikiforos Fokas. The monastery was founded by the monk Eugenius who got there from Mount Athos. It started being built in 961 at Palaiomonastiro (west of the current location). With the passage of time the monastery grew both on physical infrastructure and manpower. At its best it had gathered 960 monks. During the Turkish occupation it was a center of national action.

In 1821 it became the center of national revolution against the Turks with the unfurling of the banners and the inauguration of the fighters from Palaion Patron Germanos.

New persecutions, killings and destruction of the monastery of Agia Lavra were caused by the Nazi troops in December 1943. They burned the monastery, looted its warehouses and executed three monks, who hadn’t abandoned it. Most of the monks had remained hidden  and  came back when the troops left,  bringing with them the relics and the banner that  they had manage to rescue and started once more the repair and reconstruction work.
In 1950, the monastery, with support from the State and the pilgrims, was entirely rebuilt.

Precious relics
The most precious treasure located in the monastery is the banner of the inauguration of the fighters of 1821, ie the first flag of the Greek Nation. Moreover, the Epitaph of 1754 that was embroidered in Smyrna, the painting resemomage of   St. George embroidered in Istanbul, a gospel donated by the Empress of Russia, Catherine II the Great, the embroidered vestments of Palaion Patron Germanos, medaillons, carved wooden crosses and shrines of saints.

Also notable is the skull of “Saint Alexios the Man of God,” the patron saint off Kalavrita, whose memory is celebrated on March 17, and was donated by Emperor Emmanuel Palaiologos in 1398. There are also the skulls of St. Philaret the Merciful, Saint Panteleimon, and otheir remnants of Saints.
Apart from the important relics and remnants present in the Agia Lavra monastery ,a  very important treasure is the 3,000 documents kept in its library. The oldest one dates from 1502. In setting up the library, Lavriotis Cyril in 1796 and the teacher monk Gregory Ioannidis 1929 were among those who contributed the most.