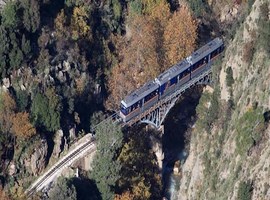 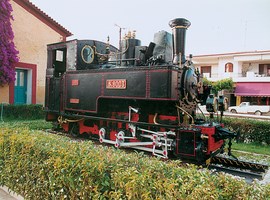 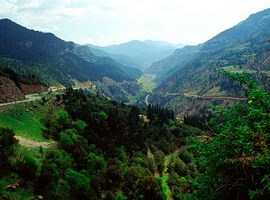 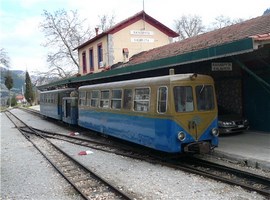 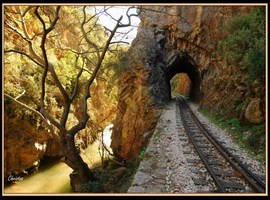 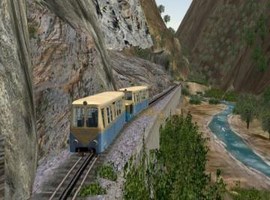 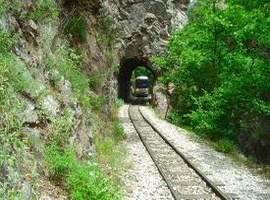 Kalavryta and the surrounding area are a touristic resort throughout the year. It’s a land with history and incomparable natural beauties. For thousands of years, the Vouraikos River starts its journey from Kalvryta, runs through the homonymous gorge and is poured at Diakopto into the Corinthian Gulf.

Odontotos rack railway or cog railway is considered as the most impressive train trip in Balkans. This route starts from the seaside town Diakopto and ends in Kalavryta, the mountainous area of the North-western Peloponnese. The entire route is parallel with the route of the Vouraikos River, the most through the gorge. Because of the big gradient of the ground, is not allowed a conventional train. That’s why between the rails are placed toothed cogs which help the operation of the mechanism to go up from the sea level to the Kalavryta station which is on altitude of 750 meters. The construction of the railway began in 1889 and was inaugurated on the 10th of March in 1896. From then until today Odontotos travels daily, all year round, whatever the weather is. 113 years ago, Greece was much smaller and weak than today. Charilaos Tricoupis, then Prime Minister of Greece, wanted to create local rail networks, starting with some points next to the main rail network and line width 75 cm. Tricoupis promoted narrowband lines because he saw that the “small” train had better flexibility, a true skill for a mountainous country and was cheaper to construct. Thus, in March of 1889 the government decided to build the line from Diakopto to Kalavryta. All the construction is absolutely similar to the around environment and not abuse the area, as is made of natural materials like stone and wood. The route includes breath-taking view, wild landscapes with waterfalls and small natural pools. At the location Katarraktis (means Waterfalls) the river’s water fall almost vertically and rapidly under the little bridge of the railway. As you travel with this beautiful, traditional train, you follow the Vouraikos River and you get a view from close of the Vouraikos gorge. The name of the river and the gorge memorializes the name of the important ancient city Voura which pioneered to the foundation of the Achaean League. On the vertical inner walls of the canyon are hosted very interesting and rare plant communities which live only in the rocky biotopes of the Eastern Mediterranean area. Some of these species are the campanula versicolor, the aromatic teucrium pollium and the local endemic plant Achillea unbelata ssp monocephala. During the trip, you can take some unique pictures of places like the Cave of the Lakes which has something unique for the whole planet: 13 underground following one another lakes! The gorge has a total length of about 20 kilometres and worth to visit it and take a look of the amazing landscape which is protected officially by the Greek state as a part of the National Park of Chelmos-Vouraikos. Diakopto is 22 kilometres away for Kalavryta and the trip lasts for 1 hour, the speed of the train is about 30-40km/h on the common rail and 6-15km/h on the cogs.

Apart from natural beauty, the town of Kalavryta is a place rich of history. The monastery of Agia Lavra here is located there. It is the place where the Greek Revolution of 1821 against the Turkish occupation begun and also is a place which witnesses the memories and the holocaust from the years of the German occupation. You can also visit some interesting archaeological sites. In Kalavryta there is a ski resort, the oldest and the biggest in Greece on the North-western side of the Chelmos Mountain with altitude from 1.700 to 2.340 metres. In the area, they are ready to host visitors, traditional style hotels and guest houses, taverns with excellent quality and tasteful food and stores to buy local products for your friends and yourself. Surely, Kalavryta and the trip through the gorge are of the greatest places in Greece which worth to give your attention to!