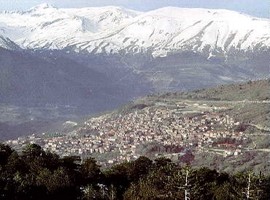 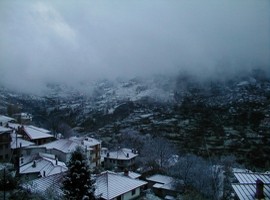 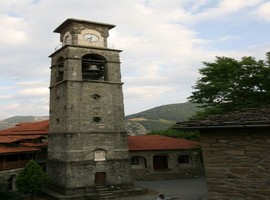 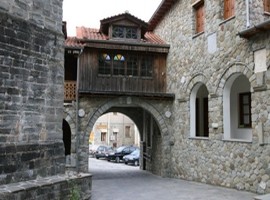 The Municipality of Metsovo consists of the municipal districts of Metsovo, Anilio, Anthochori and Votonosi.

The mountainous terrain consists of strong elevations while many species of the flora and fauna find refuge in the dense forests. The area has a rich hydrographic network. Here rises the Aoos river, which flows to the north and through Albania into the Adriatic Sea and has created the homonym artificial lake, the Arachthos river that flows to the south and ends up to the Gulf of Amvrakikos, the Pineios river etc. The continental climate brings a long and hard winter with heavy rain- and snowfalls.

The side of town exposed to the sun is called ‘Prosilio’ (literally, ‘towards the sun’) and ‘Anilio’ (without sun); the two parts are linked by a bridge. Views in all directions from the town are beautiful, with high peaks to the south and east, and the mountain air is bracing.

The side of town exposed to the sun is called ‘Prosilio’ (literally, ‘towards the sun’) and ‘Anilio’ (without sun); the two parts are linked by a bridge. Views in all directions from the town are beautiful, with high peaks to the south and east, and the mountain air is bracing. All five of Pindos’ rivers have their headwaters near Metsovo. The houses of the village are made of stone with wooden balconies, and are of two stories.The houses are linked by cobbled paths, some of them quite steep, and descend in tiers to the main platia below.

The main sights are old churches and villas, that have been lately used as museums.
The Church of Ag. Anargyroi lies on the SE side of Metsovo. It was destroyed in 1980 in order to build the Metsovo Secondary School but it was rebuilt next door. The cemetery of Goura used to be located to the north of the church.
The Church of Ag. Apostoloi (the Apostles) lies at the SW side of Metsovo and it is very old. It church boasts of a beautiful wood-carved pulpit and throne.
The baron michael tossizza mansion  used to be the mansion of the well-known Tossizza family. The museum exhibits cover the period from the 4th through the 19th century. The coin collection includes pieces from the time of Constantine the Great through Andronikos Palaiologos II. The paintings date to the post-Byzantine era and they are attributed to Damaskinos, Tzane and others. You may admire traditional household objects of the past century, costumes, weapons of eminent men of the recent history and the desk of Evangelos Averoff-Tossizza with his personal items. Apart from the folk art objects, there are many works of art as well as items of archaeological value.

The ski resort of Metsovo, 5 km away from Metsovo, is close to the chapel of Prophet Elias, Politsies plateau.The beautiful location, full of oaks and pines, makes the downhill slopes unprecedented experience. It’s base lies on an altitude of 1550m ,  while the highest point reaches 1,700m. The resort features ski tracks made of synthetic carpet, which offers the possibility for skiing throughout the year.