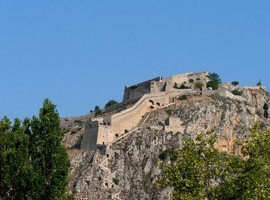 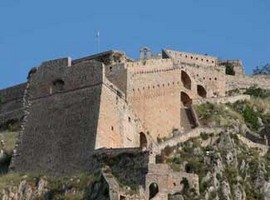 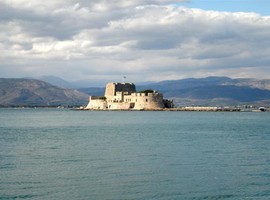 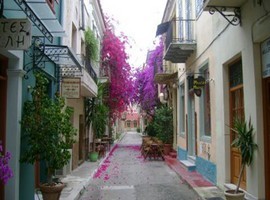 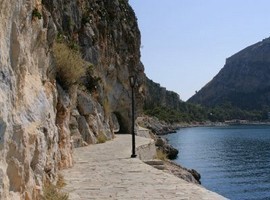 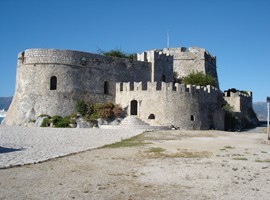 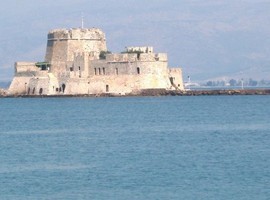 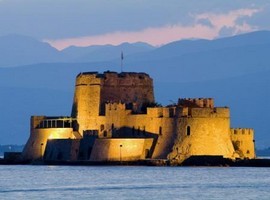 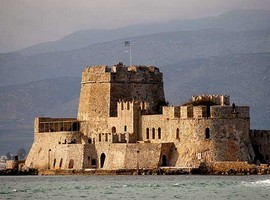 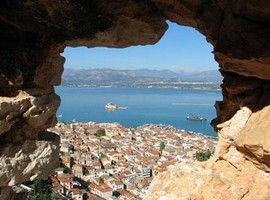 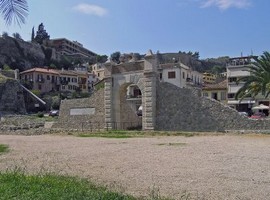 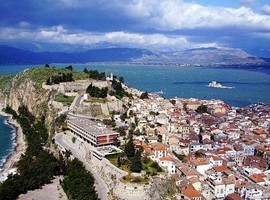 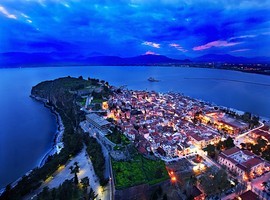 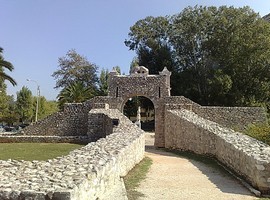 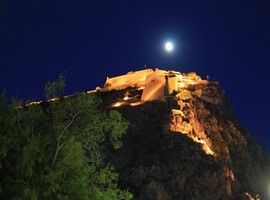 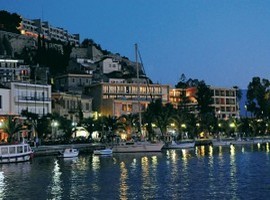 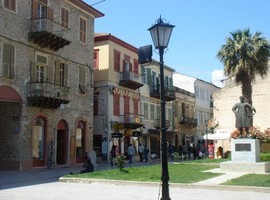 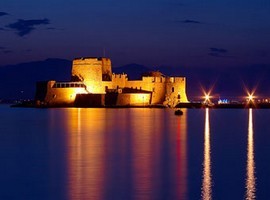 Nafplion or Nauplion is a city of Peloponnese, capital of Argolida and the main port of the eastern Peloponnese. It is one of the most picturesque cities, and was the capital of the newly formed Greek state in the years 1828 – 1833. Nafplion is known for Bourtzi, a small fort built on an island in the harbor, the Palamidi, a Venetian fortress that dominates the city, the Akronafplia (in Turkish Itch Kale), another Venetian fortress, built on the homonymous peninsula. According to Greek mythology, the site of the present city was founded by Nauplius. The site was fortified with Cyclopean walls. Archaeological findings prove the existence of the city already since the Mycenaean years. Nafplio is a popular destination  for residents of Athens and the Peloponnese, as it is close to both areas. Among the most beautiful buildings in town are the Armansperg palace (residence of viceroy of Greece Armansperg) and the archaeological museum at the Constitution Square. The city also operates an Annex of the Greek National Gallery.

Bourtzi or “Kastelli” according to the Venetians, or “thalassopyrgos” during the War of 1821, is a small islet in front of the port of Nafplion, directly opposite of the emplacement of “Five – Brothers’. It is entirely covered by an old Venetian Fortress to which it owes its name. The fortress was erected by the Venetians after the departure of Mahmoud Pasha in 1473, and it was equipped with newer guns. The 1502 the Venetians changed the fortifications at the SW side of Akronafplia, converting it to an independent bastion with battlements (“Five Brothers”). They connected it with a chain reached up to Bourtzi in order to guard the port of the city, hence the name “Port of the chain.”
Palamidi is a fortress in Nafplio , which was built in 1687 by the Venetians , after the conquest of the hill on which it is located, after a fierce battle with the Ottomans during the Venetian-Turkish War . The hill on which it is built is 216 feet high. The climb to the fortress is possible either through vehicular route or via a staircase with 999 steps. In 1715, during the latter Venetian-Turkish War, the Ottomans were able to conquer it once they blew up one part of it.
The Acronafplia (in Turkish Itch Kale) is a rocky promontory which was the ancient acropolis of Nafplio. It is located opposite the Bourtzi and on the right of Nafplion on entering the inlet of the Argolid bay. It is accessible only from the north by an artificial historical ravine called the Arvanitia. The promontory is of 45 m high on average, it has 900 meters maximum length from east to west and a width of approximately 400 m. Some parts of the walls of Akronafplia are cyclopean and have formed the foundations of later fortifications, parts of which are preserved until today. In 1540, Nafplio was occupied by the Turks who further enhanced the fortification of Akronafplia with larger cannons naming the Itch Kale (= inner castle)

The old Nafplio , or else the initial part of the city of Nafplio is relaxed, with countless souvenir shops and taverns. The town is small as the old part of which crossed comfortably in 15 minutes. The presence of tourists is strong but the scenery is still quiet. Many of the hotels are impressive and all the stores give a sense of recent renovations.

« Snorkeling in Greece
The Seven Wonders of the Ancient World »
Menu