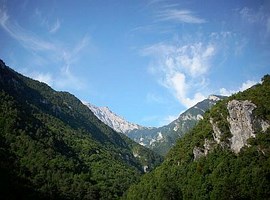 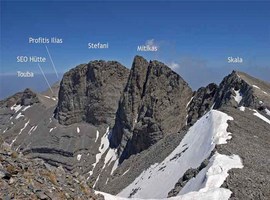 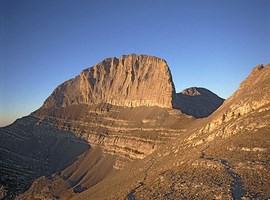 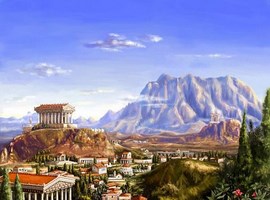 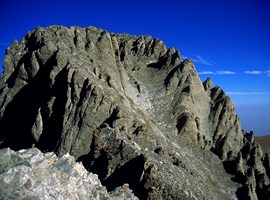 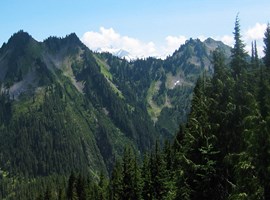 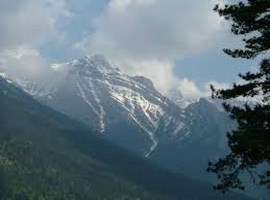 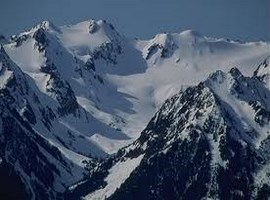 The Olympus Mountain is located between the prefecture of Pieria (Macedonia) and the municipality of Peraivia (Thessaly). These areas are ancient and share the mountainous mass and the borderlands on Olympus. The dazzling and magnificent picture of the Olympus Mountain must be sealed in the memory of the prehistoric man who lived at its foot. A lot of heroic poems and songs which have been rescued thanks to oral tradition are written by Homer during the 8th century BC. For Homer, Olympus was the center of the Greek religious consciousness, the residence of the ancient gods, with Zeus sitting high on his throne the Mytikas top and next to him were the other gods. The Homeric writings which are the oldest Greek writings talk for Olympus very descriptively. Olympus for Homer is snowcapped with a lot of canyons and gullies, is the residence of gods as well as residence pf Zeus’ daughters, Muses named Olympiads.

Olympus, the mountain of gods is doubtless the heart of Greece. The Olympian gods and all the legends expressed the freedom, the research, the optimism of the Greek soul, gave birth to philosophers, scientists and artists who raised the human substance. Olympus is worldwide famous not only for its mythological background but also for its unprecedented natural beauty and because was a place of the modern Greek history which inspires people and artists until our days. On Olympus the Battle of the Titans  took place which was a war between the Titans, based on Mount Othrys, and the Olympians, who would come to reign on Mount Olympus. During the historic years, the Greeks had built an altar of Zeus on Olympus and were offering sacrifices twice a year.

Beside the mythology, there is the reality of the majesty of wildlife and unique natural ecosystem. Olympus is the first mountain of the country that was declared as National Park in 1938 and since then is under protection. In 1981, the U.N. recognized the National Park as a part of the International Biosphere Reserves and the European community has included Olympus in the list of the “Important Bird Areas of the European Community”.

Olympus is separated in two parts, the Upper and the Lower Olympus. Main characteristic of the Upper Olympus is the plateau which is created on its highest part with a plenty of tops which are over 2.600 meters. The highest is the top Mytikas or Pantheon (2.913 meters), the Skolio (2.911 meters), the Stefani (2.909 meters) and the Saint Antony (2.817 meters). At this side of Olympus there are sparse forests and normal grounds to Larissa and steep valleys and extensive forests to Pieria. Natural border with the Lower Olympus is the Ksirolakkos gully. Depending on the area and the altitude, the climate on the mythical mountain varies. At the lower parts it is Mediterranean while  higher up it is more wet, rainfalls are also something usual for the area. The area’s vegetation is separated in 4 zones without clear borders. The first zone is characterized by dense forests with evergreen broadleaved trees (oaks, chestnut trees, arbutus) but also olive and grape cultivations. Then is the classic forest zone with firs, beech and pines. From 1.700 to 2.200 meters there is the zone of the boreal coniferous trees and the fourth zone from the 2.200 meters to the tops is the alpine zone with herbaceous vegetation and rare flower species (the 23 of them are located exclusively on Olympus). In the four zones of the mountain many kinds of mountainous mammals, reptiles, birds and a wide range of insects and butterflies are hosted.

Today, Olympus Mountain is an alive museum of the natural history, a monument of the global heritage at the same place with Parthenon and many other ancient monuments, a unique ecosystem which is offered for exploring and protection. It’s worth mentioning that Olympus is the first and unique Greek ‘’Nature’s monument’’ which passed at the second part of a worldwide voting for the 7 greatest natural monuments organized by the ‘’ The 7 Wonders Foundation’’, among 430 natural monuments from 224 countries. The mountain is one of the most important destinations for scientists, nature lovers and climbers. This fact has led to the touristic, financial and social growth of the area.

Olympus, during the Turkish occupation, obtained a great glory as its impervious forests, the inaccessible rocks and the tracker-less tops became the shelter for the Greek rebels, the defenders of the Christian faith and country. The mountain with center the area of Elassona and the around villages became the birth place for the armed force and the Greek heroes. According to the modern Greek tradition, the famous rebel Thymios Vlahavas’  father was Olympus and his mother Ossa (mountain opposite Olympus).

Olympus is located between Macedonia and Thessaly, in the middle of the Greek mainland and is easily accessible by the national roads, the railways and the provincial roads. Its’ Thessalian side is less touristic grown compared to the Macedonian side but is equally interesting. The visitors will meet beautiful, traditional and original villages, taste the local kitchen, enjoy the great local wine and will have a lot of activities in the nature like walking, climbing, mountain biking, ski and air sports. Also can enjoy the religious tourism as in the Elassona’s area and the villages of Lower Olympus are placed a lot of historical monasteries and churches like these below:

From the traditional villages of Lower Olympus, the visitor can let himself in the breathtaking view of the Aegean Sea and if the atmosphere is clear can they can even discern Chalcidice.

During the summer the visitor can take part in the notable showings of the Olympus Festival in the ancient theater of Dion and the Platamona’s castle. The Shrove Monday, in the village Ksirokampi takes place the kite flying under the impressive Olympus Mountain. The municipality of Litochoro offers retsina, ouzo, flatbread and other lenten delicacies to the thousands of people who deluge the place and have the chance to dance and have fun with the local groups. In the exhibit place of the municipality of Litochoro are hosted during the entire year art exhibitions of famous artists. In the area, under the snowcapped Olympus is located a new modern court and closed gym and in the area of the park works an athletic center with volleyball, basketball and tennis courts, space for riding and a climbing court.

Leptokarya: a sandy beach at the foot of Olympus, awarded with the European Blue Flag. Organized and safe is offered for family holidays and for every type of visitors. Hotels, motels and rooms to let with excellent conditions, restaurants, café bars, discos and night clubs are available to satisfy each one of you. The visitors can also see the cave where was born Orpheus and the Muses town.

Nei Pori: a beach awarded with the European Blue Flag which is located next to an important wetland. The area offers many choices for entertainment and stay. It is near to the traditional village of Palei Pori where are stone built houses since the 17th – 18th centuries and the byzantine church of Saint George.

Platamonas: a wonderful beach with view to Olympus and the legendary castle of Platamonas. Its crystal blue waters are awarded for years. In the area is located small port for vessels. During the summer are take place theatrical shows, concerts and other cultural demonstrations for the Olympus Festival.

Paleos Panteleimonas: built on the sides of Olympus, Paleos Panteleimonas is one of the most beautiful villages of Macedonia where the tradition meets the respect to the environment. It’s a traditional restored place with unique view to the Thermaic gulf and the coasts of the Southern Pieria. In the area an environmental school is located and on the tight paved streets there are stores with local products and local art pieces. The village is an ideal place for sport activities like walking, biking etc. and 4×4 routes. Traditional guest houses wait to host you and traditional eating houses offer special, spicy delicacies and the unique tsipouro made of cranberries.

Dion: an ancient village from the 4th century BC close connected with Philip and Alexander the Great. There, the glorious athletic games of Dion were organized. Ancient remains of public buildings, stores, houses, instruments, coins jewelry and other pieces testify the wide range of the human activity and the developed urban way of life.

Olympus and the strange secrets of the mountain of gods

The throne of Zeus:this is an incredible phenomenon. Every morning, during the sunrise the shadows which are created on the steep rocks portray the face of Zeus! It’s a fact that excites locals and visitors and that’s why the location is named “the Zeus’ throne”.

The Olympian Pyramids: these are 3 pyramidal tops which have been created since the ancient years. Scientists say the distance and degrees created among them are exactly the same with the 3 Orion stars in the sky which are known as the three kingdoms. The 2 of these stars are in a straight line and the third is in a 27 degrees distance.  The same degrees angle as the Giza’s pyramids! Natural or artificial, these Olympian pyramids are covered by a mystery.

The church of Prophet Elias: are many the residents and the scientists who have mentioned that in the area where is located this church exist very strong electromagnetic fields. A lot of people claim when were in the place had a feeling of gooseflesh and their hair was up from the local electrical load.

The cave of Tsakalopetra: this cave has a 600 years history since the Turkish occupation and in where the residents were hiding from the Turkish men and later from the Germans. The place has concentrated the interesting of the scientists of NASA to make their experiments as is strongly loaded with geomagnetic and electric field. Climbers who were in the area of cave mentioned that were listening clearly speech from the cave!

People say in life you can’t have them all. But imagine yourself in the Olympian calmness of the 2.913 meters, to sit on the Zeus’ throne and in front of you to lay out 70 kilometers of coastline. Open your eyes and see what you have dreamt: mountain and sea, a natural beauty shows its secrets just for you. As you will note by yourself the Olympus Mountain is a mythical place with countless myths and legends. Either they are natural phenomena or inexplicable facts, one is sure: Olympus no incidentally was the center of the world!