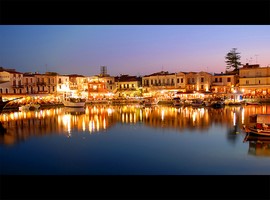 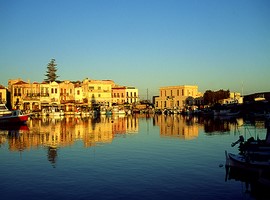 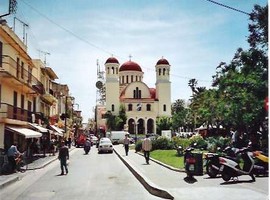 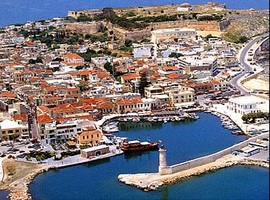 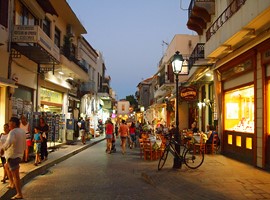 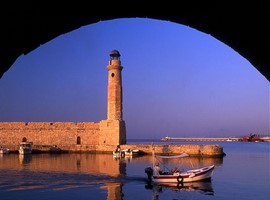 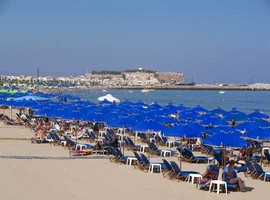 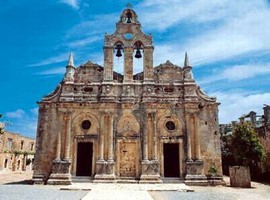 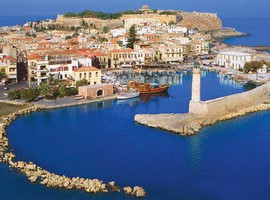 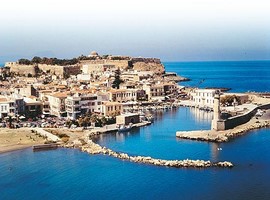 The prefecture of Rethymno is a beautiful region on the Greek island of Crete. This prefecture is an area of tranquillity and relaxation. In keeping with the rest of the island, the villages of Rethymnon display traditional quaintness. Rethymnon Town is the main town in this region. In Rethymnon Town itself, you can take a walk along the stone paths, marvel at the elegant mansions and historic arches. The focal point of the town is the Venetian port, a popular spot, where you will find delicious food at the taverns and cafés. Dominating the town, high up on a hill, stands the Medieval castle, known as Fortezza.

This area offers a choice of stunning beaches for the tourist. On the northern coast you will find Bali, Panormos and Adelianos Kampos. On the southern coast you will find the popular tourist spots of Plakias and Agia Galini. Inland the prefecture, the island has a number of quaint traditional villages where visitors can relax while listening to authentic Greek music. Historical monasteries such as  Preveli and Arkadi are located here and the visitor can also view some impressive gorges.

Above the town of Rethymno, Crete, dominating the skyline, stands a Medieval castle, the Venetian stronghold of Fortezza. It is built on a low hill, known as  Palaiokastro, which means “old castle” in Greek.  The Venetian maritime power built this stronghold between 1540 and 1570 as a bastion against the Turkish pirates. Fortezza has a turbulent history and an even older structure may have stood in its place in years gone by.

Over 100.000 labourers from Crete, with 40.000 pack animals were forced to construct this imposing fortress. Despite its strength, it was conquered in 1646 by the Turks. Over the next three centuries, constant attacks on Fortezza caused only the outer fortifications to remain to this day. Restoration is under way on some of the buildings. The castle is visible from every part of the town. Visitors can enter the stronghold of Fortezza via the East Gate with its magnificent archway. Once inside, you have a stunning view down onto Rythymno town.

Once inside Fortezza, there are a number of interesting sights not to be missed. The famous Bastion of Santa Maria is found here, as well as the Ibrahim Han Mosque. The orthodox chapel, the church of Agios Theodoros Trichinas, was built here in 1899 by the Russian Governor of Rethymnon. A more modern feature, the 20th century Theatre of Erofili, is home to many cultural events during the summer months. This theatre is named after a play written by a local Greek play writer, Georgios Chortatsis.

The cave of Ideon

Anogia is a traditional village on the border of the Heraklion and Rethymno prefectures towards the Nida Plateau. 20 km from Anogia one finds the famous Cave of Ideon Andron, where according to mythology, the Greek god Zeus spent his childhood. The cave stands at an altitude of 1.495 meters on the Eastern side of Mount Psiloritis, or Mount Idi as it is also known.

A beautiful scenic path winding between high mountains and stunning rock formations will take the visitor up to the Cave of Ideon Andron. The cave is of significant archaeological interest. Once inside the main entrance, you will see that the cave opens into a large chamber with two horizontal caverns. A further cavern has also been uncovered above the main chamber. These huge caverns have been sculpted over centuries by water and snow. Inside the cave, it is cool, and one can even find snow blocks here in the Summer.

At the Heraklion Archaeological Museum visitors can see the results of excavations in this area. Magnificent items of antiquity are displayed; a well preserved bronze shield, various types of spears, gold and ivory figures are also amongst the relics to be seen.

The monastery of Arkadi

Arkadi is one of the most famous monasteries in Crete and has a particular historical interest. It is a very popular attraction for tourists.

The monument stands on the edge of a high plateau, 23 km southeast of Rethymno and about 500 metres above sea level. It is believed that an Arkadian monk built the initial fortressing structures of the monastery in the 12th century.

The monastery of Arkadi is famously known for the events of November 1866. During this time, the Cretans rebelled against the 200 year domination of the Turks. The Turkish soldiers attacked the monastery and the siege lasted for days. Many women and children had sought refuge inside the monastery during this time. Upon orders from a monk inside, the Cretans chose to blow up barrels of gunpowder, killing all inside and most of the Turkish soldiers too. This act of desperation by the Cretans, not to fall into the hands of the Turks, is widely known. The Monastery of Arkadi symbolizes the Cretan liberation and is amongst the most famous in Crete.

The monastery also has a museum with a good collection of post-Byzantine icons, papal artifacts from the 16th century and relics of many revolutions. Take your time, there is a lot to see here!

A touching memorial, dedicated to the brave Cretans who died in 1866, stands outside the monastery. This memorial displays the remains of the dead.

On a lighter note, the Marine Museum is great fun for the whole family. It showcases the full spectrum of marine life around Rethymno, having a huge collection of beautiful shells, fish and sponges of all shapes and sizes. All these items come from the local area. If you are not into deep sea diving, get your glimpse of the sea depths at the Marine Museum!

The Museum is open all week with the exception of Sunday and Monday. Children will love the place and, as well as having fun, will also learn a lot about marine life. The Museum does a great job increasing the awareness of the natural beauty of this region.

The town of Rethymno

Rethymno is the main commercial centre and capital of the prefecture of Rethymno. It is located 60km west of Chania and 80 km east of Heraklion. Rethymno has about 20.000 local inhabitants who earn their living predominately from the tourist trade. Rethymnon also has a university, and the students keep the town lively and buzzing all year round.

Rethymno is a town which combines old time aristocratic features and modern day living. It is built on the site of the ancient city of Rythimna. Excavations have revealed many interesting relics from here. The beautiful town of Rethymno enchants visitors with its traditional design and rich cultural history.

The old town surrounds the famous Venetian fortress Fortezza. The town offers wonderful viewing for the visitor. Beautiful churches, Turkish fountains, arched doorways, municipal gardens and stunning Venetian buildings are to be enjoyed. Hellenic and Roman remains can be seen and the whole town offers an aura of elegance and charm.

The modern section of  the town of Rethymno is found around the natural bay. Here the tourist  can enjoy traditional food at seaside taverns and restaurants. Shops and accommodation abound at the busy waterfront and all other tourist facilities are available.

The picturesque Venetian port is found in the heart of Rethymno town. This is a haven for romantics! From the Venetian port, one can take a ferry to the harbour of Piraeus or the nearby port of Souda. Rethymno town is an extremely popular tourist spot, and the streets burst with activity during the high season when visitors arrive from around the world.

After having some refreshments at the bay, go on a sightseeing trip to the Mosques, the Municipal Garden, the Venetian Fortress and the Archaeological Museum.

East of Rethymno Town, about 32 km away, is the lovely coastal village of Bali. Bali is nestled in the mountains and offers many small coastal inlets where visitors can swim and relax. The water is clean and crystal blue and the atmosphere is peaceful. After a day at the beach, find some delicious food at one of the many taverns and cafés in the village. Accommodation is available for those wanting to stay longer.

Closer to Rethymno Town, only 4 km to the east, is Platanias beach. Visitors can easily get to this beach by using local buses. This beautiful beach is sandy and open to the North. As such, it is subjected to the summer winds, known to the locals as meltemia. Keep this in mind if you don’t want to be blown about too much!

Platanias beach offers both accommodation and traditional Greek taverns serving delicious local food and drinks. The beach is well organized and is a great place to enjoy a day by the sea.

Panormos is an enchanting fishing village, 22 km east of Rethymno town, on the northern coast of Crete. The beach is sandy and well organized. The atmosphere is calm and relaxing with crystal clear water in which to bathe. Taverns and tourist accommodation which offer panoramic views over the sea can be found in the surrounding areas.

Stretching north along the coast of Rethymno is a long sandy strip  covering about 20 km. A 5 km section of this strip, called Adelianos Kampos, is a lovely beachy area. Known to the locals as Adele beach, it is a very popular spot for families.

One can take a walk along the clean pebble beach and find a private spot to set up for the day. Alternatively, you can sit at one of the many taverns or bars on the main strip. Find some chairs and an umbrella and enjoy the view!

Adelianos Kampos offers one of the most developed tourist-friendly areas in Rethymno. Tourist shops filled with clothes, artworks and souvenirs line the beach, and the locals are friendly and helpful. Leaving the beach, you can take a walk through the quaint village, where the inhabitants will make you feel at home.

For the more energetic, Platenes village offers a different experience with water sports, disco bars and golf parks. Lovely resorts and cheap studios can be found near the beach. Platenes village can be reached by public bus from Rethymno, or from Heraklion, which is 1 km from Adele beach.

Why visit the prefecture of Rethymno

The prefecture of Rethymno is a truly amazing place to visit. It is filled with history, architecture, quaint villages and beautiful beaches. The Town of Rethymnon offers both an old and modern experience. Venetian and Ottoman structures, such as mosques, public baths, catholic churches and fountains abound, while the bay area has modern tourist facilities, shops and taverns.

Outside of the town, in the surrounding region, you will find imposing Byzantine monasteries, stunning blue lakes, deep gorges and tiny mountainous villages.

This is the Cretan landscape, sometimes fertile, sometimes wild, always impressive. Don’t miss the chance to visit the prefecture of Rethymno!