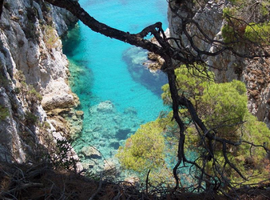 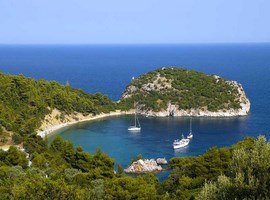 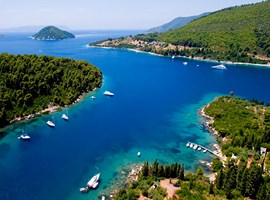 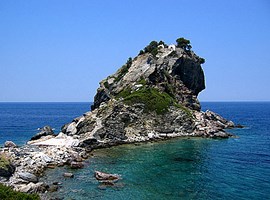 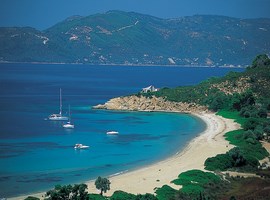 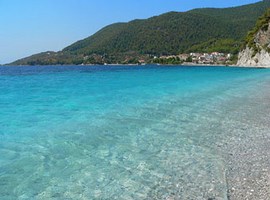 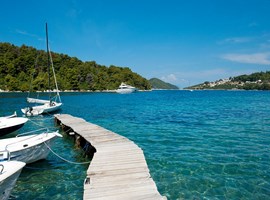 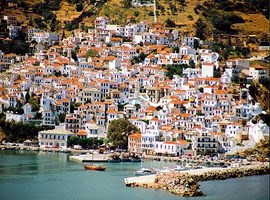 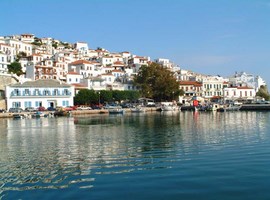 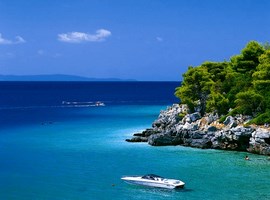 If you were ever faced with the hundreds of islands that “litter” the map of Greece, maybe you have wondered how people choose their favourite for their holidays. On Skopelos, however, the local residents know why their island is so unique: it’s quite simply one of the greenest in Greece. It has five million pine trees, 50.000 olive trees, and 5.000 friendly and hospitable people. According to official European studies, Skopelos is the greenest and bluest island in the Mediterranean Sea.

Thanks to its plentiful cool fresh water, the island used to be one of Greece’s most important trading points as there were produced high quality wines and extra virgin olive oil. A small but impressive museum up a back street converts the archaeological finds and changing financial fortunes into a colourful potted history. The olive oil industry is still a major island business, along with the much healthy and tasteful organic honey and the delicious plums. The prunes are considered as to the best in the world, and even the famous Californian producers refer to Skopelos as the benchmark for the highest quality.

There are wide variety hotels in Skopelos for all tastes and budgets but most of the visitors prefer to rent an apartment or a villa. The nicest town houses have beautiful stone walls and floors and are painted in lively colours, with wooden balconies which overlook the port. The streets and stairs are totally white and are brushed and washed every day. There are also a lot of flowering bushes especially jasmine, everywhere in Skopelos and their wondrous aromas fill in the evening breeze.

The closest pair of beaches – Stafilos and Agnontas – is very beautiful and can be reached on foot but it’s really worth to visit the northern beach of Panormos. This name means in Greek the perfect harbour and its waters are deep enough and extremely clean. The beautiful beach is a shelter for the island’s traditional boats and fishing boats. It is also the ideal place for snorkeling and swimming. The neighboring beaches Milia and Kastani are also good for sunbathing and they have at least one tavern which offers local, fresh, grilled fish, sandwiches and cold Greek beer. Two beautiful beaches and a nice little church are located in the bay Agios Ioannis. It’s the mountainous rocks that frame the bay and make it so special and nothing can block the breath-taking view east to the island of Alonissos. At the northernmost point of the island are 3 nice locations with the most interesting names; Cape Gourouni (Pig), Fat George Beach and Dead Woman Beach.

Skopelos is just 21 kilometres long, so it is quite easy to explore it during a relaxing holiday. You can hire a car and you can bronze your body in a different location each day! If you are one of the boldest you can visit the nudist beach of  Velanio which is around a golden sandy bay. Skopelos is also called since a couple of years ‘’the Mamma Mia island’’ as in its amazing landscapes was filmed the famous Hollywood movie ‘’Mamma Mia’’. In the film, the already mentioned Kastani beach has a groovy beach bar which is full of sexy barmen and cool fruit cocktails. Although, a cold beer in a wooden shack wearing a pinny is much closer to the style of Skopelos.

If you want to do something else than beach life, a drive around the island offers some great sights. It is recommended to visit the ancient hillside monastery of Evangelistria which can be seen from the harbour in the centre of Skopelos. You can travel back in time with a trip to Glossa. The steep, cobble paved streets and the white painted houses with their blue shutters make it picturesque. Just a few metres out of Glossa is Ag. Ioannis with its  monastery that sits on the top of a rock in the sea and was the scene for the wedding in the movie of Mamma Mia! Finally, you can take part in the organised boat trips which include all-day excursions. If you are lucky enough you might even see some passing dolphins!

On the island of Skopelos there are dozens of taverns lining the harbour and serve fresh fish, delicious Greek dishes accompanied by the traditional drink ouzo. If you are a couple and you want to enjoy a romantic dinner, just go to one of the many back-street restaurants, which provide a friendly, cosy atmosphere.

Why choose the island of Skopelos for your holidays

Because it is a small island of the Aegean Sea, so much different from the others. Its unique vegetation, the wonderful landscapes, the relaxing atmosphere and the crystal blue waters are only some of the good reason to visit this emerald island of the Greek Seas. Picturesque villages and houses which have not been affected by the growing tourism can offer some unforgettable moments for you and the people with you. Just choose it and enjoy its beauty!